We invite you to follow Paige through her journey and treatment of severe scoliosis.

“I want to thank everyone so very much. Our Fundraiser on June 24 was amazing. Everyone had so much fun. We raised over $20,000 for my surgery. I couldn’t have done this without the help from all the people at Coldwell Banker Grass Roots Realty, Gold Country Gymnastics, donations from local businesses and all the generous donations from people of this community and beyond. It means so much to me. My hope of getting the surgery I need is turning into reality, and it’s because everyone came together to help. So far we have raised $103,000 out of the $150,000 goal. Thank you so much. Through this experience I realized what community means. In a world that seems divided at times, I know that when everyone comes together, amazing things can happen. That’s what community means to me. Sending my love to all.” — Paige Lyon

Two years ago Paige was diagnosed with scoliosis. At first, her curve was a moderate 32 degrees. She wore a brace for 18-23 hours per day. Unfortunately, her curve continued to progress and it is now over 70 degrees. Her spine has twisted, causing a hump in her rib cage. This condition has affected her movement as well as her self-esteem and self-confidence. She battles with the daily physical, emotional and social struggles that come with scoliosis. Presently, her only remaining option is surgery. Specifically, Anterior Scoliosis Correction (ASC).

Because Paige has “severe scoliosis” there is only one group of surgeons, located in the New York/New Jersey area that will do the ASC procedure. They are Dr. Antanocci, Dr. Betz and Dr. Cuddihy, also known as Drs. ABC, at the Institute of Spine and Scoliosis.

Paige flew out to New York/New Jersey and met with Drs. ABC. The doctors felt Paige would be a good candidate for the ASC procedure and are confident that they can help correct her curvature. Due to her age, they have recommended doing the surgery as soon as possible. This will stop the advancing curvature and allow her remaining growth to re-form her spine, rib cage and muscles.

Time is of the essence.

We Need Your Help 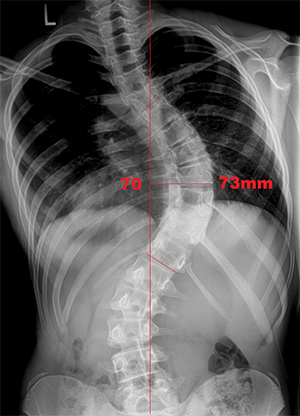 Helping Paige: Family of 14-year-old Nevada City girl in need of funds for their daughter’s spinal surgery The teen years have not been anything like what Paige Lyon envisioned for herself. Up until the age [...]

Time is of the Essence

DETAILS ABOUT OUR EFFORTS

Due to Paige’s age, the doctors have HIGHLY recommended doing the surgery within 3 months. Paige is at the end of her growth. Her bones are still soft and malleable at this time so it’s critical that Paige gets this done. The surgery will stop the advancing curvature and allow her remaining growth to re-form her spine, rib cage and muscles. In addition, this will avoid any further developments and problems associated with scoliosis.

Two years ago Paige was diagnosed with scoliosis. Her scoliosis progressed very rapidly. At first, her curve was minimal. As a precaution she was transferred to Shriner’s Hospital. Her curve quickly progressed to a moderate 32 degrees. She wore a brace for 18-23 hours per day for many months. Unfortunately, her curve continued to progress to over 70 degrees. Bracing wasn’t working. We flew Paige to Green Bay, Wisconsin to a physical therapy clinic, ScolioSmart, that specializes in scoliosis. The therapy helped stop the progression of her curve. But unfortunately, her scoliosis has twisted her spine, causing a hump in her rib cage. Surgery is now her only option to correct the scoliosis.

Anterior Scoliosis Correction is far less invasive than the traditional spinal fusion surgery. With traditional spinal fusion, two rods are fused to the spine resulting in little to no mobility. Often, patients of spinal fusion undergo multiple surgeries throughout their lives. Anterior Scoliosis Correction is a less invasive surgery and rarely need additional surgeries. Titanium screws are placed in the vertebrae and a cord ( white polyethylene-terephthalate flexible cord) is attached to each screw. When tightened, it corrects and straightens the spine and allows full mobility.

Dr. Antonacci is nationally renowned spine and scoliosis surgeon and has extensive surgical experience in adults and children, with particular specialization in scoliosis surgery. He’s made pioneering advancements in muscle-sparing spine surgery. Randal R. Betz, MD is a nationally recognized surgeon with over 30 years of experience in caring for children and adults with problems of the spine. Laury A. Cuddihy, M.D. is a fully trained spine surgeon, having completed her fellowship in spine surgery under Dr. Randal Betz and Dr. Antonacci at the prestigious Shriners Hospital for Children in Philadelphia,PA.

With your generous donation, this surgery promises Paige a chance for better health and to fulfill her dreams.